This Cape Chestnut seed oil is Wild Sourced through sustainable harvesting practices in Kenya, Africa in such a way that it enables the forests to remain for harvesting purposes, instead of being continually logged for timber or firewood, or cleared for the growing of crops.

Calodendrum capense (Cape Chestnut) - beautiful tree from the Cape, the name says it all (kalos means beautiful, and dendron tree in Greek, capense is Latin for from the Cape) 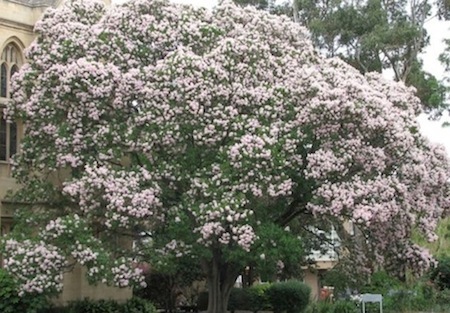 Wild sourced, Cape Chestnut seed oil is also known as Yangu oil and is cold pressed from the seeds of the ripe fruit of the tree. An African tree, first studied at the Cape in South Africa, it became widely cultivated for its prolific flower display. It is native to the east side of the African continent from the equatorial highlands of Kenya and Ethiopia, through isolated mountains in Tanzania, both sides of Lake Malawi, the Highlands in Zimbabwe, lower slopes of the Drakensberg Mountains of South Africa and coastal forest areas from Port Elizabeth to Cape Town.

The tree can reach 20 metres high in a forest, but in cultivation it is more likely to reach 10 metres, with a more spreading canopy. The trunk is smooth and grey and the leaves are ovate up to 22cm long and 10cm wide. The large pink flowers are produced in terminal panicles and cover the tree canopy in the early summer. It grows mainly in forests and ravines or gorges, but occasionally in scrub and riverine bush, from sea-level right up to 2000 m. When in bloom, the whole canopy turns pink. It is a magnificent sight. 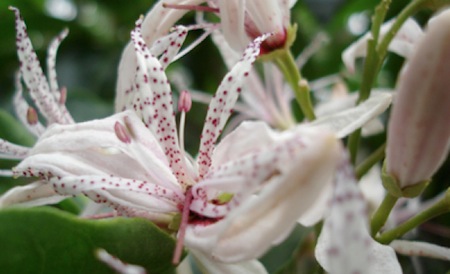 The Cape Chestnut Seed oil, otherwise known as Yangu oil, is a popular oil in traditional African skin care. Its inherent ultra violet protection and its high content of essential fatty acids and antioxidants and its mild smell destined it for natural cosmetics. Not only is this remarkable, very stable oil high in essential fatty acids and antioxidants but it also provides inherent protection against ultra violet radiation. As a pure oil it is used to moisturise and nourish dry, damaged skin. As a healing ointment it is used by those who suffer from Psoriasis, Skin cracking, Eczema, Scaling or Sagging, or Chapped lips. 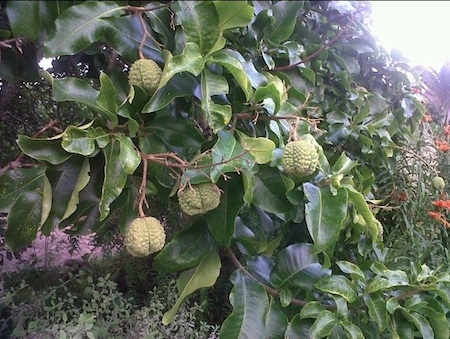 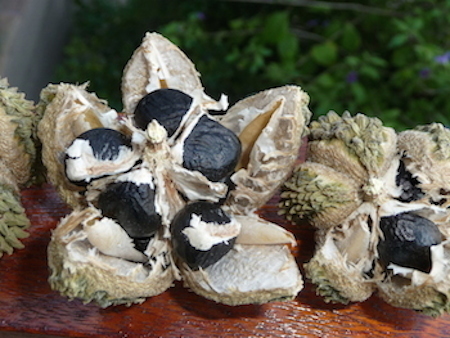 The tree obtained the common name of "Cape Chestnut" because explorer William Burchell saw a resemblance to Horse Chestnut in terms of flowers and fruits, however it is not closely related. The ovary, on a long gynophore (stalk carrying the female organs), swells to form the fruit which is green maturing to brown, 5-lobed woody capsule with a rough warty surface, splitting during late summer to autumn, to drop the large smooth black seeds which are hard but surprisingly light in weight. The seeds have also been used by native Xhosa hunters, who dried them and made them into jewelery to be worn around the wrist for good luck. Pigeons, monkeys and doves eat the seeds of the tree.

Forest communities living adjacent to Mt Kenya harvest the seeds in a sustainable manner. The income supports the adjacent communities of the Kikuyu tribe. They understand the long term value of Cape Chestnut seed oil and that by harvesting the seeds, while protecting the trees, the benefit is realised. In doing so, the local communities are safeguarding wild-forested areas instead of destroying them.

Illegal charcoaling, logging and poaching are currently the gravest problems affecting the environment of the forest regions of Mt. Kenya. To prevent further destruction, these forest communities welcome the opportunity to find alternative ways of sourcing an income which simultaneously preserves the forest in its natural state.