The astaxanthin in Sunumbra sunscreens comes from a microalgae called Haematoccous pluvialis, which is considered to be the most powerful natural antioxidants yet discovered. 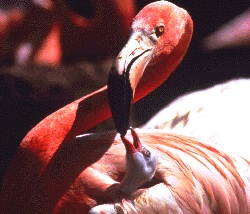 Many people aren't aware that baby flamingos are born white. They only obtain their pink color once they eat food that is loaded with astaxanthin.

It has enjoyed an upswing in popularity ever since Dr. Mercola talked about its beneficial effects on Dr. Oz's show and Oprah. They have spoken about how, in addition to being one of the most powerful anti-oxidants we know of today, astaxanthin also shows great promise in protecting the skin against the sun. It has shown an ability to:

There are only 2 known sources:

One key area that it has a positive effect on, is your mitochondria:

The anti-inflammatory properties are being seen to provide athletes with increased muscle performance and faster recovery.

With its powerful antioxidant qualities, it scavenges free radicals created in muscle tissue after strenuous exercise, thus also protecting the mitochondria - the powerhouses of the cell. Mitochondria being the parts of the cell that convert food to energy using ATP, or adenosine triphosphate, they are vital for the maintenance of energy and stamina levels.

It's superior antioxidant capacity over other carotenoids is due to it being oxygenated.

The actual molecule has the longest double-bonded, conjugated polyene chain of any of the related xanthophylls, with both hydroxyl and carbonyl groups at each end. It is this configuration that provides the excellent antioxidant capacity, and the incorporation of free radicals into its polyene chain to trap them.

Other carotenoids and antioxidants may perform one or two of these functions, but astaxanthin does them all, and in most cases, does them better.

In one study it was shown to increase in moisture level as well as visual wrinkle reduction after only four weeks of application. (Seki, t., Sueki, H., Kohno H., Suganuma, K., Yamashita, E.: Effects of astaxanthin from Haematococcus pluvialis on human skin - Fragrance Journal, 12: 98-103, 2001)

In another study it showed that women with dry skin saw significant improvements in spots and freckles, acne and pimples, dark rings around their eyes and less wrinkling of their skin. (Yamashita E.: Cosmetic benefit of dietary supplements including astaxanthin and tocotrienol on human skin. FOOD Style 21, 6: 112-117, 2002)